A gazing ball, garden ball, yard sphere or whatever you call it, it’s …something  that’s grown on me in the last year or so. There was a time I thought they were the silliest things. Why would anyone want a shiny ball on a pedestal anyway? Well, this year I’ve wanted one! And wanted one badly enough to to make my own, cause paying full price for one at Home Depot just isn’t me! So I thought I would try a child’s bouncing ball and paint it but I was afraid that would be too light to stay on a pedestal in the wind. It would need to be heavier…more like a bowling ball. I just happened to find two at my favorite local thrift store, and they were $4 each. Probably not a bad price (I’ve never bought a bowling ball before) but I knew in two weeks they would be $2 each. Yes, I’m cheap thrifty. So I waited, I mean who else would want an old bowling ball anyway? The Friday before the sale started, I went to check and make sure they would be where I could find them on Monday and much to my major disappointment, they were BOTH gone! :-( Sold the day before! But I was really counting on making one of those silly balls so off I went to another thrift store and found this:
It’s easy to see why he was still there, I think he’s seen better days! He was only $3 too!
OH NO!!!! I just went to put in a picture in between the last two paragraphs and the pictures aren’t there! I had gotten a message about “unknown format” when I tried to take the last couple of pics, but I didn’t know the first ones didn’t stay on the card…ggggrrrrr….So, I have a few of the last steps on another camera card and two from my phone of the work in progress. Let’s try this, picture a brownish orange old bowling ball, then picture it stuck on a piece of rebar in the garden wiped clean and ready to be painted. I bought this:

Only in blue, but I lost that picture  too… anyway I sprayed the ball hoping for that shiny blue finish, but it was not to be…I don’t know if it is because I wasn’t painting metal or if it was the blue going over the brown, but I ended up with a murky blue/black. I wasn’t happy at all, so I went and found a can of a chrome like paint from the Dollar Store and went all over it lightly, but that made it worse, so I went over it HEAVILY and got this: 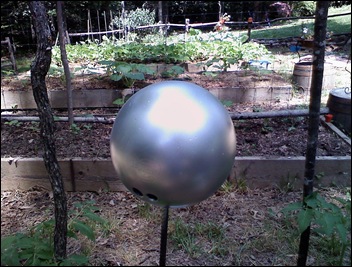 Better, but still not what I wanted, so I started lightly spraying the blue around and kind of misting the ball till I got this: 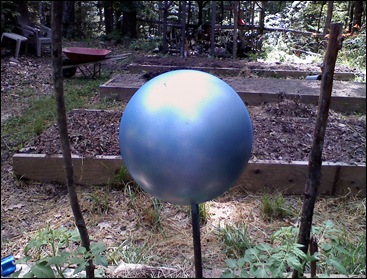 I know it’s not the best picture, I took it with my phone to send to a friend. As I would look at the ball, I noticed darker blue patches and I would try to even it up only to have it happen again! As I moved, I realize that the dark patches move too! It was an illusion…I love it!
Okay, on to the next disaster. Remember this: 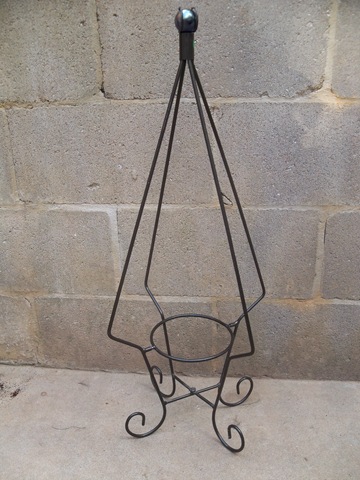 I found it thrifting and thought it would be perfect to put a gazing ball into…there’s already a small one on top. Guess what? The bowling ball is too BIG! But I have another stand that is totally a rusty mess and needs to be sanded. The picture of it was also on the bad card. I would really like for you to be able to see it because of how amazing it turned out after Keen Hubby loaned me this: 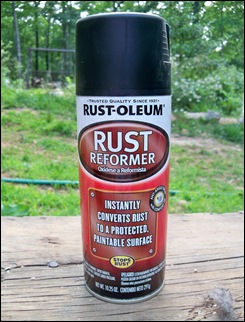 This stuff really works! After just a  light sanding, you wouldn’t even know the stand  had been soo rusty  The Black Satin spray paint  went on top so smoothly! 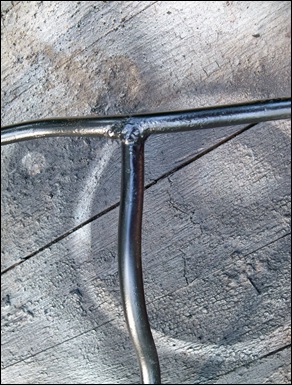 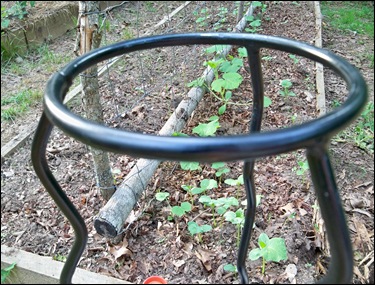 It’s hard to tell much when you don’t have the before picture, but trust me, the Rust Reformer is Awesome Stuff!!
Well, at least I have some pictures of the finished product. Here ya go! 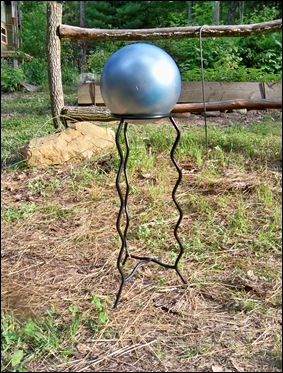 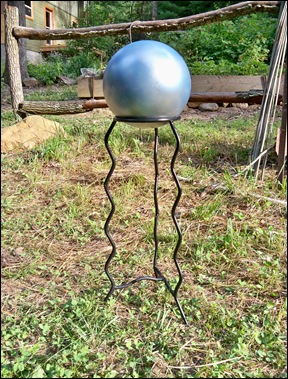 I’m happy with it…not happy with my camera! :-( I’m going to have to find a permanent home for it in the garden tomorrow! The ball, not the camera! LOL I’m tired!
Good Night!!