Yes, you read that right! You can get all three, from the same apples…and it’s easy as well as thrifty! I followed a recipe several years ago for apple jelly and apple butter from the same apples. I couldn’t find it this time when I tried, so I did a little research for recipes that sounded good individually and then used them together!
Most of my pictures of the whole process are on the same card that my Mason Jar Soap Dispenser pics are on, so I am borrowing some and recreating some to try and give some visual, I know it’s not the same, but this little secret was too good not to share, even without the proper pictures.
First, you have to go pick some apples…

then, prepare them for 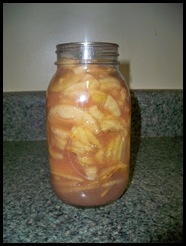 Miss Kitty’s
Apple Pie Filling
Prepare your apples, enough to fill 7 quarts. Fill your clean jars with apples. Pour over the apples this mixture, that you have boiled until clear:
8 cups water
6cups sugar
1 cup cornstarch
1TBL salt
1TBL cinnamon
Wipe jar tops, screw on seal and bands and process in a boiling water bath for 20 minutes. A quart is enough for a 9 inch pie.
I used my apple corer, slicer and peeler on my apples and it makes nice slices for the jars. 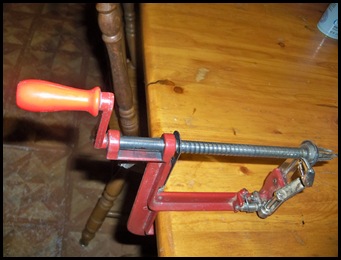 It also makes the process faster. I take the leftover skins and the cores and put them in a pot, put enough water in them so that you can almost see the water through the top of the apples. Bring to a boil and simmer til mushy. While they are simmering, I filled the quarts with apples and liquid for the pie filling.
When I finished putting the pie filling in the jars and put then in the water bath canner, the skins and cores were about ready I put them through a strainer, and saved the juice and discarded the “muck”. 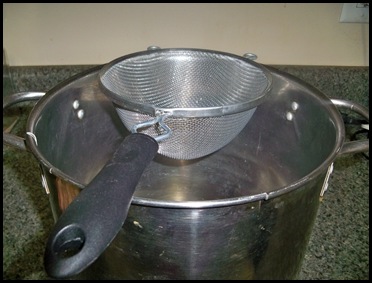 I reran the juice through the strainer and a layer of cheese cloth. 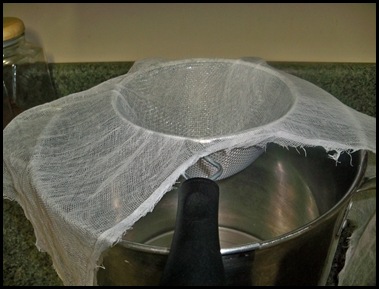 Saving the apple puree that remains in the cheesecloth.  I had about 4 cups of apple juice to use for

Bring juice to  a boil and simmer for 5 minutes. Add 2 cups of sugar.Boil for 7 minutes. Add last cup of sugar and boil for 10 minutes. Ladle into hot jars seal with hot lids and process in boiling water bath canner for 10 minutes.
I had almost a cup of puree left after I strained the apple juice. I put that into a plastic container and put it in the refrigerator to wait for the apple butter. I made a total of  4 batches of the apple pie filling, strained the juice each time and ended up with enough juice for 4 batches of jelly. I made up one batch of the apple jelly and froze the rest of the juice to make into jelly later. At the end I also had almost enough apple puree from straining the juice to make a small batch of crock pot apple butter! 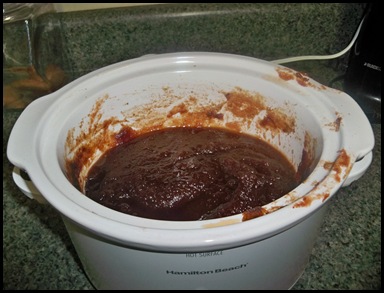 Easy Crock Pot Apple Butter
4 cups applesauce (I used the puree leftover from straining the juice and added a little home canned applesauce to get all the way to 4 cups.)
1/3 to 1/2 cup sugar
1 tsp cinnamon
1/8 tsp cloves
1/4 tsp allspice
In a slow cooker, combine all ingredients. Cover and cook on LOW for 14 to 15 hours or until mixture is a deep brown.
Spoon hot apple butter into hot sterilized jars and seal, then process half-pints or pints 10 minutes in a boiling water bath.
So, here is the end result, minus several jars that have been eaten or given away! there are 3 bags of juice in the freezer too! 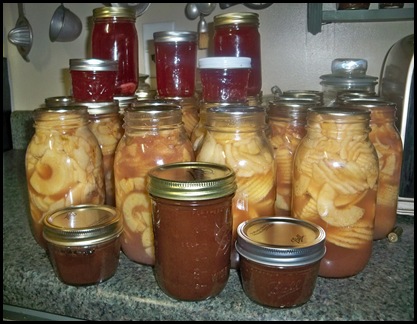 One batch of apples can go a long way!

I’m going to share this at Ott, A’s party . She is having a canning/canning jar linky party with giveaways!Click the button below or in my sidebar to join me! I’ll also be linking up to some of the other great parties in my sidebar!