There’s nothing like starting a BIG project, like tearing out a kitchen and then leaving everyone, including myself, hanging is there? Once again, it was not intentional. I L-O-V-E blogging and write blog posts all the time…in my head…while I’m driving, cooking, showering, anywhere but it front of the computer. We’ve had Thanksgiving, end of the semester homeschool co-op projects to finish, and then sickness to keep me away from the kitchen and the keyboard. That’s why my kitchen still looks like this: 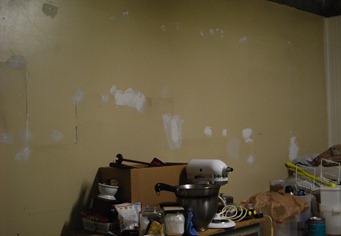 along one wall. The rest of it isn’t ready to show yet either but instead of getting back to the kitchen I decided to do a fun  craft project. It’s one I hope will give the kids something “new” to do together.  It would be one thing to say “Go play checkers with your brother/sister.” It’s quite another to say “Go play Christmas checkers with your brother/sister.” That request is new and different and catches the attention before anyone can say. “I don’t want to play checkers….” And who can resist a game of reindeer against snowmen? I planned this game in my head during one of my drives. I had a large game board with large pieces in mind so that my kids could also play with my grandsons when they come up for Christmas. Dollar Tree came to my rescue, having almost everything I needed except the red Duck tape that I found at Wal-mart. At the Dollar Tree, I found two sheets of green poster board,one red and one white foam board. I thought I might have a hard time finding something large enough to be my game pieces, but I was tickled to find these giant pennies in the party favor section. 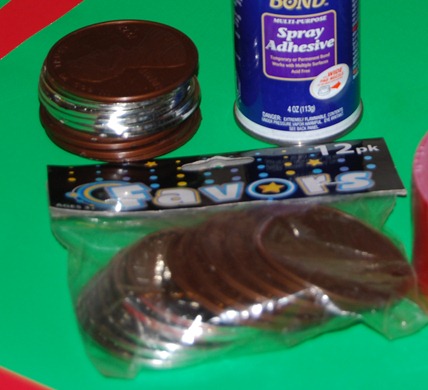 I got  everything together, poster board, 2 sets of coins, glue, mod podge, spray paint and duck tape. 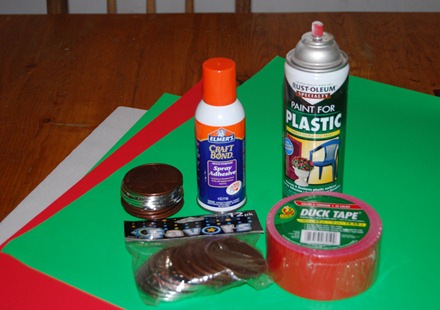 No laughter here, but I thought I would be able to do this with strips but…uh-uh, I had to cut out the green in squares and lay them on the red poster board. 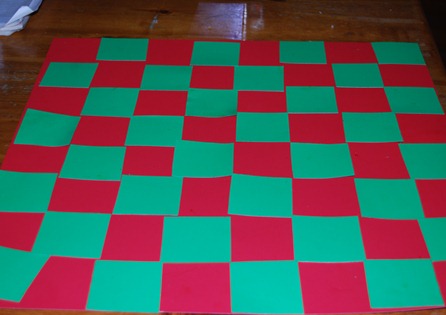 Because this is such a big project I wanted to make my own mod podge. I’ve used it before when I made a faux stone arch for my stove. I found the super easy recipe at Life in Rehab. All you need are glue, water and a container. 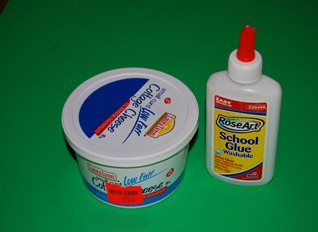 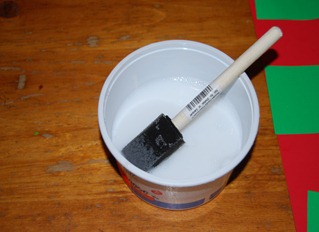 And this stuff works too! I put it over my stove, which didn’t have any type of exhaust fan or anything, so it was constantly being hit with steam. When we started taking the kitchen apart, the “faux stone” was still harder to get off than real stone! It took me a while and a lot of scraping, but it’s off. I’m hoping it will protect the checker board from wear and tear the same way! 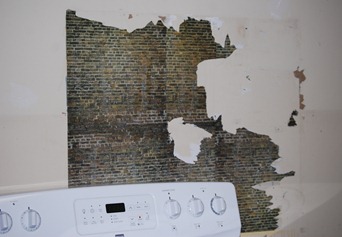 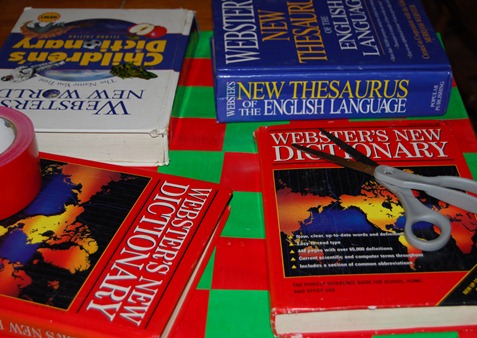 To make the game pieces, I spray painted the coins white with Rustoleum spray paint for plastic. While they dried, I printed and cut out the snowmen and reindeer circles I made to go on the coins. 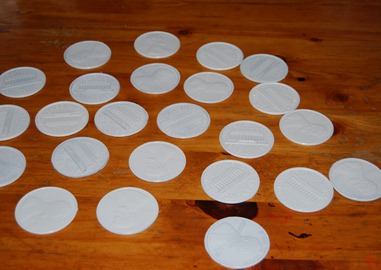 To glue the cut outs onto the coins, I used “real’ Mod Podge, because it is thick and would fill in the bumpy spots on the coins.  I left the front of the coins, with Abraham Lincoln’s head uncovered to be used as  the “crown” when the checker makes it to the other side. 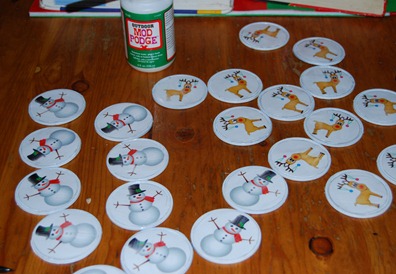 When everything was dry, I lined them all up “Reindeer vs. Snowmen” Checkers! 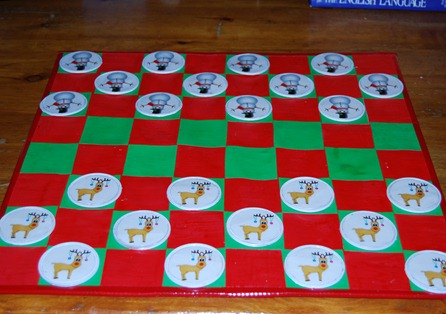 I almost forgot to mention that I used the red Duck tape to bind all the edges. You can see it along the bottom edge in the picture above. Here’s a close up of the pieces. 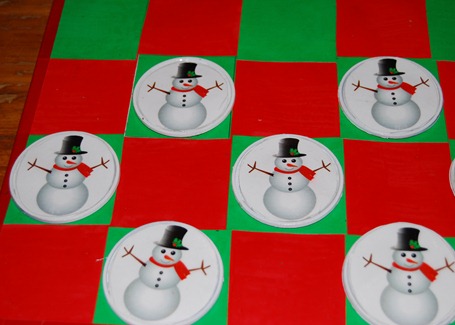 When they are tired of playing checkers, they can flip the board over and play tic-tac-toe! 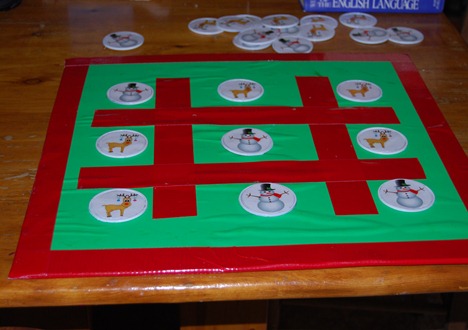 I  LOVE the red tape! 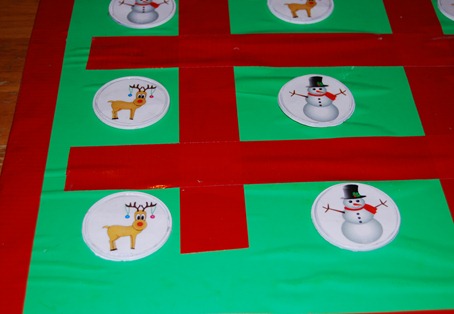 My youngest son already wants to play but I’m going to let everything “cure” overnight  and let the anticipation build! About five dollars for some family fun isn’t too bad. I even had fun making it!

A faster, easier version would be to make some Christmas-y checkers to use on a regular checker board. If you would like the reindeer/snowman circles, leave me a comment and I’ll see if I can get them to upload like my other printables.

Sharing this at these fun places: